Within the context of financial market legal framework (and the MiFID Directive in particular), a spot contract is understood as a contract for the sale of a commodity, asset or right, under the terms of which delivery is scheduled to be made within the longer of the following periods:

(b) the period generally accepted in the market for that commodity, asset or right as the standard delivery period. 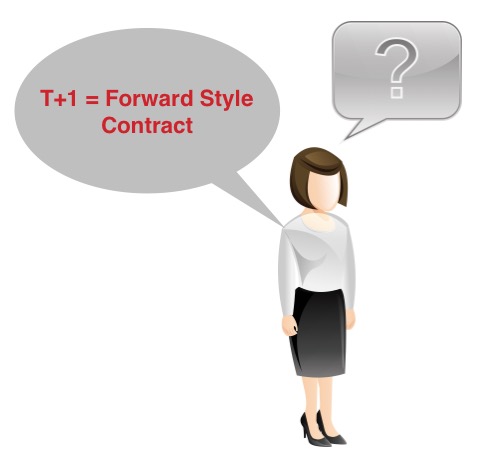 The above definition is contained in Article 38(2) of the Commission Regulation (EC) No 1287/2006 of 10 August 2006 implementing Directive 2004/39/EC of the European Parliament and of the Council as regards record-keeping obligations for investment firms, transaction reporting, market transparency, admission of financial instruments to trading, and defined terms for the purposes of that Directive (OJ L 241, 2.9.2006, p. 1).

In turn, "forward" is usually defined as "a contract that includes an obligation of at least one of the counterparties that has a due date which is later than for spot contracts" in the sense of the aforementioned Article 38(2)(a) of the Regulation 1287/2006 (see, for example, CESR/CEBS consultation paper on the MiFID commodities review (CESR/08-370)).

Hence, the term "forward" in most common cases will amount to transactions with a maturity date longer than two days.

Remarks above refer to the financial legislation framework and the MiFID II Directive does not change much in this context.

However, the REMIT Regulation, representing, in itself, a major legislative innovation, has added some complexities to the above dichotomy.

For a contract to become a "forward style contract" under the rules of the REMIT transactions' and orders' reporting framework it is sufficient that a physical delivery is scheduled at a later date than a contract date. Even one day time-lag makes a contract "forward style" one.

"Market participants that have to comply with EMIR should focus on EMIR requirements rather than on the REMIT ones. Parties involved in the execution of an ETD contract will have to report their transactions under EMIR. If they do so, they are complying with REMIT too. However, the obligation to report orders to trade to the Agency is still with the market participants.

There is no need for separate guidance on reporting of ETD contracts and their life cycle events (such as exercise of an option or those actions that are not visible to the market) even though they are reportable under EMIR.

For example, the description for the Data Field No 13 of the non-standard reporting form of the REMIT Trade Reporting User Manual (TRUM) accentuates for bilateral contracts "forward style contract refers to the forward style which also includes spot transactions. Market participants should not understand forward style as a sort of derivative contract but as the style of the contract itself, i.e. physical delivery at a later date."

As is expressly stated in the TRUM, under the specific REMIT reporting rules "forward style contract" includes also spot.

For longer-term contracts the above TRUM's clarification is not a surprise, but there are instances, where a caution is required.

For example, the day-ahead transaction (T+1 delivery schedule) is a "forward style contract" under REMIT reporting framework, but still a spot contract for the purposes of derivatives reporting under EMIR.

The point is, both REMIT/EMIR derivatives reporting schemes sometimes overlap - the reporting requirement under EMIR encompasses all derivatives contracts, OTC and exchange-traded alike, while Article 3(1)(a) and (b) of the REMIT Implementing Regulation (Commission Implementing Regulation No 1348/2014 of 17 December 2014 on data reporting implementing Article 8(2) and Article 8(6) of Regulation (EU) No 1227/2011 of the European Parliament and of the Council on wholesale energy market integrity and transparency, OJ L 363, 18.12.2014, p. 121) stipulate the reporting of the following derivatives contracts (unless already reported under EMIR or MiFIR):

- options, futures, swaps and any other derivatives of contracts relating to electricity or natural gas produced, traded or delivered in the European Union,

- options, futures, swaps and any other derivatives of contracts relating to the transportation of electricity or natural gas in the European Union.

Among examples will be derivatives trades for the electricity produced, traded or delivered in the European Union, not reported under the EU financial legislation - like those of the US counterparty covered by Dodd Frank. They will come under REMIT (the more detailed remarks on the REMIT/EMIR derivatives reporting overlap are available here).

In the ACER's view, the general direction would be that market participants that have to comply with EMIR should focus on EMIR requirements rather than on the REMIT ones (see box).

To conclude, for the day-ahead contracts first determine, which reporting framework is applicable, as these can either be a spot or a forward style contract - depending on EMIR/REMIT blurred applicability.