Regulated market means a multilateral system operated and/or managed by a market operator, which brings together or facilitates the bringing together of multiple third-party buying and selling interests in financial instruments in the system, in accordance with its non-discretionary rules, in a way that results in a contract, in respect of the financial instruments admitted to trading under its rules and/or systems, and which is authorised and functions regularly and in accordance with the provisions of Title III of MiFID Directive.

Under MiFID I most European countries had only a small number of regulated markets. The exceptions were Germany, United Kingdom, Spain and Italy, which possessed a higher than average number.

In addition to the EU, the ESMA's list included also regulated markets in Norway and Iceland. 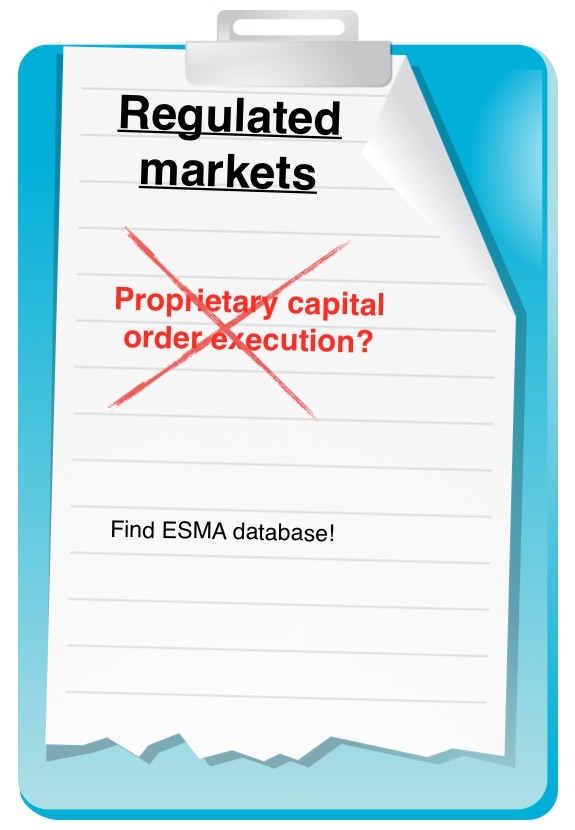 According to Article 56 of MiFID II ESMA is also required to publish on its website and keep up to date a list of all regulated markets.

The register, as visited on 9 January 2018, was populated with data regarding 29 regulated markets.

The ESMA’s register of regulated markets under MiFID II can be accessed here.

The said definitions exclude bilateral systems where an investment firm enters into every trade on own account, even as a riskless counterparty interposed between the buyer and seller.

Hence, single-dealer system being a bilateral system must not be operated as regulated market.

Both regulated markets and MTFs execute orders in accordance with non-discretionary rules - an element differentiating them from organised trading facilities (OTFs).

Regulated markets and MTFs are not allowed to execute client orders against proprietary capital.

As opposite to MTFs and OTFs, regulated markets are characterized by the fact that the operating this type of multilateral system does not represent an investment activity or service.

The fifth sentence of recital 7 of MiFIR explains that regulated markets (similarly to MTFs) are not obliged to operate a ‘technical’ system for matching orders and should be able to operate other trading protocols including systems whereby users are able to trade against quotes they request from multiple providers.

Pursuant to Regulation (EU) No 648/2012 of the European Parliament and of the Council of 4 July 2012 on OTC derivatives, central counterparties and trade repositories (EMIR) derivatives contracts the execution of which does not take place on a regulated market (or on an equivalent third-country market) are over-the-counter (OTC) derivatives.

For the purposes of the definition of OTC derivatives, in accordance with Articles 2a(3) and 2(7) of EMIR ESMA publishes the List of third-country markets considered as equivalent to a regulated market in the European Union.

In particular, European Commission deems US Designated Contract Markets (DCMs) that operate under the regulatory oversight of the CFTC as equivalent to EU regulated markets in accordance with EMIR - see the Commission Implementing Decision (EU) 2016/1073 of 1 July 2016 on the equivalence of designated contract markets in the United States of America in accordance with Regulation (EU) No 648/2012 of the European Parliament and of the Council.

The Decision went into force on 22 July 2016. A list of the relevant DCMs is set out in the Annex to the said Commission Implementing Decision.

The practical effect of the Decision is that products traded on equivalent third-country markets (in this case DCMs subject to CFTC regulatory oversight) no longer fall under the OTC derivative definition under EMIR Article 2(7) and therefore are no longer subject to the EMIR obligations relevant to OTC derivatives (such as the inclusion within the calculation of the clearing threshold for non-financial counterparties).

As said above, unlike MTFs and OTFs, positions on regulated markets (or on an equivalent third-country market) do not count towards EMIR clearing thresholds.

It means, collateral applied for regulated markets trading will have to fulfil identical requirements to the ones already used for OTC markets  under EMIR.

Hence, after the MiFID II entry into force derivatives trading settlements carried out on regulated markets will be governed by Article 46 EMIR (see here details for the collateral settlement on the OTC market under EMIR).

MiFID II framework for regulated markets reflects the regulation of investment firms in respect of the conditions for authorisation and the general operating conditions. In particular, there are requirements governing:

- the stability of the management;

- the suitability of those who control the management; and

MiFID I already has the category of regulated markets.

The changes to the existing framework for algorithmic trading and transparency notwithstanding, the most significant change MiFID II makes with respect to regulated markets is the update of the provisions dealing with the suitability of the management in the same way as the similar provisions for investment firms, and, more broadly, the introduction of a modified regime for the operation of the management board.

Consequently, when it comes to costs, regulated markets will need to commit resources to reviewing their existing management board arrangements to ensure that they comply with the specific requirements under MiFID II and make the necessary changes.

However, the management board requirements are aimed at ensuring that regulated markets are more effectively run. This should also help to strengthen the resilience of secondary trading and the quality of trading services that are offered (Financial Conduct Authority, Markets in Financial Instruments Directive II Implementation – Consultation Paper I (CP15/43), December 2015, CP15/43, p. 56).

MiFID II contains, moreover, provisions, which deal with the specifics of regulated markets. Among them are:

- admission to trading of financial instruments;

- suspension and removal of instruments from trading;

- compliance with the rules of the market;

MiFID II Directive leaves these provisions largely unchanged (with some exceptions relating to the suspension and removal of instruments from trading).

If operating under the reference price waiver, regulated markets will be affected by the double volume caps (ITG, MiFID II: Systematic Internalisers and Liquidity Unbundling, p. 2).

Article 53(1) of MiFID II requires regulated market to establish, implement and maintain transparent and non-discriminatory rules, based on objective criteria, governing access to or membership of the regulated market.

The brief overview of the non-exhaustive list of arrangements which are considered non-objective and discriminatory has been given by the EU financial market watchdog in the Questions and Answers on MiFID II and MiFIR market structures topics of 7 July 2017 (ESMA70-872942901-38).

In the document ESMA said:

a) Regulated markets should not require members or participants to be direct clearing members of a CCP.

Given the protections afforded to non-clearing members under MiFIR and EMIR, as well as the rules on straight through processing (STP), a regulated market should not require all its members or participants to be direct clearing members of a CCP.

Regulated markets may however require members or participants to enter into, and maintain, an agreement with a clearing member as a condition for access when trading is centrally cleared.

There are legitimate checks that regulated markets might carry out before allowing a member or participant on to their venue.

For example, in markets for non-centrally cleared financial instruments regulated markets may wish to carry out credit checks, or ensure that a member or participant has appropriate capital to support the positions it intends to take on the regulated market.

In a non-centrally cleared derivatives market, there may be a need for bilateral master netting agreements to be in place between participants before the trading venue can allow their trading interests to interact.

Regulated markets will also need to be comfortable that potential participants are meeting the regulatory requirements to be a member of a trading venue such as having appropriate systems and controls to ensure fair and orderly trading.

However, in centrally cleared markets, enablement mechanisms whereby existing members or participants of a regulated market can decide whether their trading interests may interact with a new participant’s trading interest are considered discriminatory and an attempt to limit competition.

d) Regulated markets should not impose restrictions on the number of participants that a participant can interact with.

In a request for quote (RFQ) protocol, a regulated market should not impose limits on the number of participants that a firm can request a quote from.

Whilst a firm requesting a quote may, in compliance with Article 28 of MiFID II, want to limit the number of participants it requests quotes from in order to minimise the risk of unduly exposing its trading interest, which could result in it obtaining a worse price, this should not be mandated by the regulated market.

For instance, where a smaller firm is requesting a quote to execute a low volume trade, it might be less concerned about the risks of exposing its trading interest, and so happier to request quotes from a larger number of market makers or liquidity providers.

Limiting the number of participants a firm can request quotes from risks restricting the ability of market participants to access liquidity pools, and only sending requests to traditionally larger dealers who they assume might have larger inventories.

This simultaneously restricts the ability of the requestor to access the best pool of liquidity and reduces the likelihood of a smaller dealer receiving requests, despite it having a strong trading interest.

Eligibility to be a member or participant of a regulated market

The eligibility to be a member or participant of a regulated market in the EU is not restricted to authorised investment firms only,

Article 53(3) of MiFID II provides that an entity that is not an investment firm or a credit institution can be a member of a regulated market under certain conditions.

Hence, entities exempted from MiFID authorisation under Article 2(1) can also be a member of participant of a regulated market.

The above stance is supported by the ESMA’s answer to the Question 4 (Questions and Answers on MiFID II and MiFIR market structures topics, ESMA70-872942901-38, Multilateral and bilateral systems, General, updated on 07.07.2017).

Can a person that is not authorised as an investment firm but meets the requirements of Article 53(3) of MiFID II be a member or participant of a regulated market or an MTF?

Yes. Article 53(3) of MiFID II provides that an entity that is not an investment firm or a credit institution can be a member of a regulated market under certain conditions, this rule being extended to MTFs by Article 19(2) of MiFID II.

ESMA considers that this provision should be read in conjunction with the requirements of Article 2(1). Under this provision, a person falling under any of the categories listed in Article 2(1) would not have to be authorised as an investment firm.

However, pursuant to Article 2(1)(d) (ii) of MiFID II, when a person dealing on own account in financial instruments other than commodity derivatives or emission allowances or derivatives thereof and not providing any other investment services or performing any other investment activities in such instruments is also a member of or a participant in a regulated market or an MTF, it falls under the scope of MiFID II, and should accordingly be authorised as an investment firm unless:

As a consequence, the reference in Article 53(3) to persons other than investment firms and credit institutions only relates to entities that are exempted from authorisation under Article 2(1), such as insurance companies or collective investment undertakings, as long as their own regulatory framework permits them to do so.

This Q&A does not address the issue of non-EEA firms being a member or participant of an EEA trading venue.

The requirements seek to ensure that the regulated markets have proper governance, testing and continuity arrangements around algorithmic trading to minimise disruption to trading on their markets.